The Sphinx located in Giza, Egypt, is the largest and most famous sphinx in the world. The Great Sphinx is located southeast of the pyramids of Giza. When was it constructed is still an open debate among Egyptologists.

Many mysteries surround the Great Sphinx of Giza. As of today, archaeologists are still digging for answers for below the sands of the Giza Plateau is hiding more ancient history that we yet haven’t discovered. 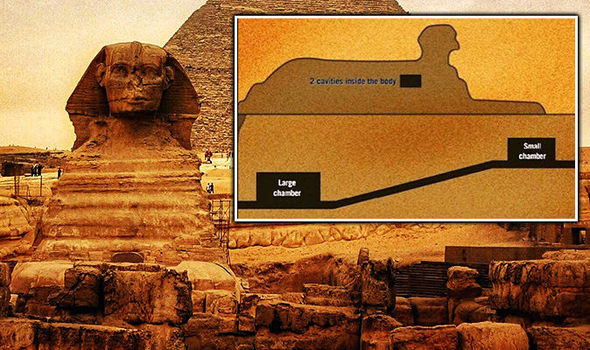 The excavation started back in 1935 and the findings were unbelievable: the “Secret City”, an ancient Egyptian city that was then thought to date back 4000 years.

Nonetheless, it wasn’t notice as great as it really was. As a result of this, Egyptologists of the time focused on tombs of queens and shafts that had sunk deep into the ground to burial tombs sometime during the 24th Dynasty, which was as late as 732 BC to 716 BC.

It makes you wonder why such an incredible discovery of a whole 4,000-year-old underground metropolis didn’t make it through the papers? How did it pass unnoticed? Well, apparently, Egyptologists back then believed the chambers under the Sphinx weren’t possible to explore deeper as the chambers were either blocked or full of water. So they kind of let it go.

The Enigma Of The Head

In 1798, a hole on the top of the Sphinx’s head was first discovered. Then, in 1920, the opening was confirmed using an aerial photo of the sphinx taken from a hot air balloon.

The head of the Sphinx is made out of a different material than its body. It is believed to be a mixture of materials, but it is hard to determine it due to erosion. The sides of the headdress are quite smooth and we only need to glance at the mythical creature to spot the lighter color of the body compared to the darkness of the head.

Many modern Egyptologists have given themselves the task to reveal what has been beneath the Sphinx all these years and finally unravel all the mysteries that lie underneath it. Nonetheless, others researchers want to keep it a secret.

According to declarations of Zahi Hawass, an expert in ancient Egypt, there’s nothing to be revealed around the Sphinx. But many disagree and state that he wants to keep in place the conventional understanding of ancient Egyptian history, no matter how many new findings contradict what is currently believed to be true.