Ships cannot fly. That is a statement of something so obvious that it seems a bit pointless to make. However, David Morris, a 52-year-old British man, resident of The Lizard, recently witnessed an event that made him doubt this simple fact and even his sanity for a few moments.

He was walking with his dog through the beautiful landscapes of the southernmost part of the English coast and then he suddenly looked out to sea. There, he saw a ship suspended in the air in the middle of the water.

At first, he could not believe it, it’s impossible that something like this was happening. He cleared his eyes and tried to focus and gaze back to the ship and there it was suspended in midair, it seemed that it was flying over the sea as it approached the port.

It was impressive that David decided to take a photo and immortalize the moment, probably to also have some evidence of the event in case no one believed him: “I told myself, ‘It must be on water. My head doesn’t want to understand that, but it must be on water” said David Morris. 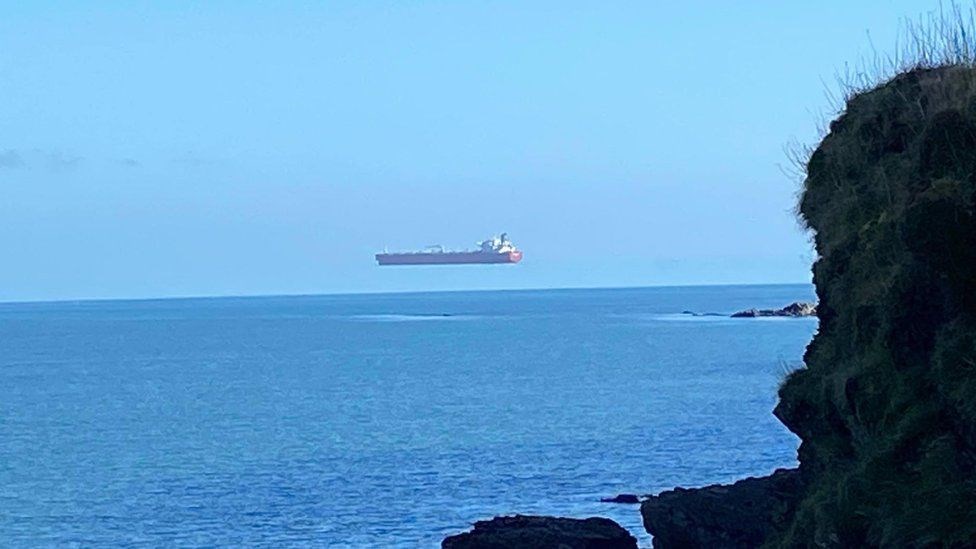 The image is spectacular, you can clearly see that the ship is flying above the water. But is it really? The answer is no, the ship is definitely not flying, but also no, David is not crazy either. The situation is basically due to an incredible optical illusion created by the density and temperature of the air combined with the temperature of the water.

The Superior Mirage, as this amazing natural phenomenon is known, is much more common to see in the icy waters of the Arctic Ocean.

When the temperature of the water and the air that is above the surface is exponentially different, the density of the air changes and causes the sunlight to bend on the horizon as it bounces against the surface of the sea.

That creates multiple layers of air with different temperatures, making light travel through them at different speeds. These distortions cause a mirror of the horizon sky and seen from a few miles it creates a visual distance between the water and everything that is on its immediate surface.

“David Morris took a photo of the “floating ship” while walking near Falmouth, Cornwall. This rare phenomenon, Fata Morgana, makes it appear like a ship is floating above water and occurs when cold air sits on top of warm air and bends the light downward.” pic.twitter.com/qM6ccAef1s

The photo went viral on social networks and surprised many who at first thought like David that something like this was impossible.

After understanding that it is only an optical illusion, we can remain certain that ships cannot fly but at least now we know that sometimes it could appear that they do.