Human sacrifices were part of the offerings to the gods that ancient cultures constantly made. Records of these activities come to our days usually in written stories that have lasted over time and in some other cases thanks to mummies that allow scientists to take a look at the conditions of life and death of that person who – unknowingly – with their deads could have contributed to the unveiling of the mysteries of history hundreds of years later.

In 1999, a group of scientists found the remains of a 15-year-old girl who had frozen to death more than 500 years ago. This girl was a member of an Inca community that lived in the Andes mountains and was presumably left to die at the site of her discovery along with two other children as part of a ritual of human sacrifice to the gods.

The impressive thing about this girl is that she was found perfectly mummified by the cold. Her body has such a level of preservation that her organs are almost intact and blood was even found still present in her lungs and heart. 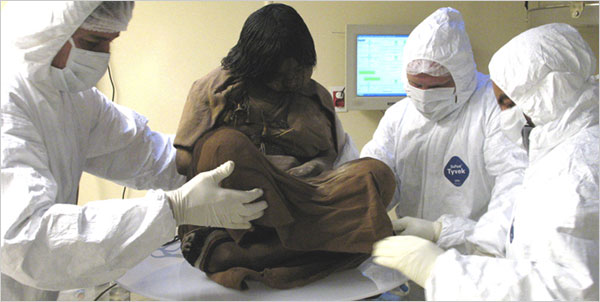 Her face shows some signs of deterioration but this is more than expected since at least 5 centuries have passed since her death, however, most of her facial features are still there. She is even presumed to have died in her sleep and the position in which she was found supports that theory.

The impressive state of conservation of this girl is not the result of any human mummification process, the icy conditions, the cold wind and dry weather of the mountain range did all the work.

As she was named, the Maiden of Llullaillaco is currently on display at the High Mountain Archeology Museum in Salta, Argentina in an acrylic chamber with an average temperature of -0.4 ° and is undoubtedly the best-preserved mummy ever found in history.