Vikings were a group of people experts in trading goods, raiding for booty, and conquered diverse lands which were settled in the Scandinavian peninsula, region of Northern Europe including Denmark, Sweden, Norway, Iceland, Finland, and other islands. These sailors lived between the 8th and 11th centuries.

They were known for being violent warriors motivated and fueled by their beliefs in Norse religion, focusing on Thor and Odin, the gods of war and death. Also, they were characterized for being agriculturalists dedicated to grow crops and raise animals in every land they got. So, in case you want to know a little more about this legendary culture, here we bring you things you might don’t know about them.

Unsurprisingly, the very word that defines them actually stands for a pirate raid. However, not all were plunderers, some dedicated their life to settle in the region and farm, raising cattle, goats, pigs, and sheep. There weren’t any movies or TV shows about them, tho.

Vikings believed in scarifying animals or captured people. They did it in every season of the year. They boiled the body and then stirred its blood over everyone around the fire to attract the presence of the gods in the days to come, later ending the sacrifice with a big meal and lots of alcohol. Also, when someone in their family died, they incinerated him/her too with some items that the person could need to survive in their afterlife.

8. Vikings Caused A Desert In Iceland

Vikings’ activities had an impact in some parts of Europe, including Iceland, where the abuse of resources and deforestation near the volcanic soil could never be able to recover. This is one of the first examples of humans taking a massive toll on nature.

Vikings were fierce slavers. They used to mistreat and carry around ‘Thrall’, which were the bottom-feeders of their society. They suffered incarceration, human trading, rape, and multiple violations of what we know as human rights nowadays.

Archeologists discovered that Vikings carved and cut horizontal grooves in their teeth. It is still an intrigue why they do it, could be something to recognize each other, a dental care procedure, or a religious belief. That’s intimidating, that’s for sure.

Vikings invented a way to get the smoldering properties of urine out by boiling it with Fungus. When they blew it, they created fire for cooking, sanitation, and of course; their attacking expeditions. I don’t know if I would like to participate in that ritual tho.

When you now choose to get a costume for Halloween dressed as a Viking, take into consideration that they did not wear horned helmets, just metal helmets to their battles but without horns. Yeah, that’s yet another lie from Hollywood.

3. Viking Used To Ski For Fun 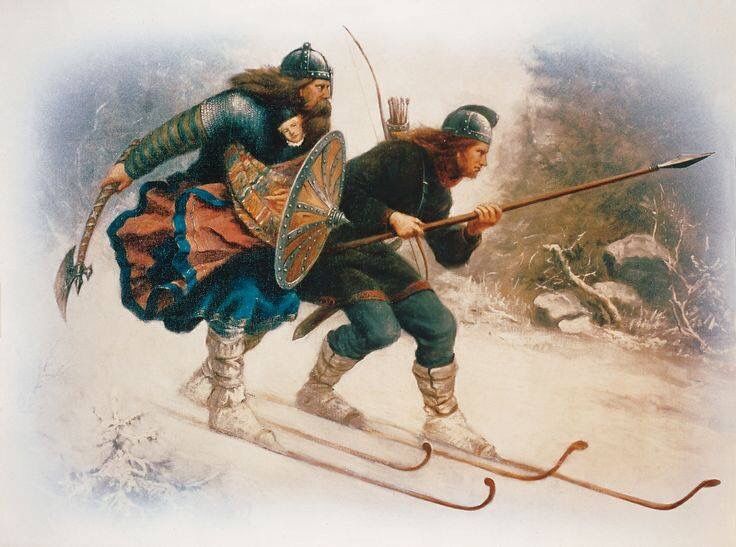 Vikings weren’t just fierce warriors and often had fun like the rest of us. Yes, Vikings didn’t waste the glaciated mountains around the establishments and used to ski for fun and also for hunting. They build their skates with bones and wood.

It is well known that the Vikings took a lot of time to take care of their appearance, taking time to light their hair and beard, take long baths and wash their hands. It has been found that they used tweezers, razors, comb, and even ear cleaners.

1. The Name ‘Bluetooth’ Comes From A Viking

Harold Bluetooth was the king of Denmark and had a dead tooth that looked blue and dark. He accomplished to unite Denmark and Norway in a single territory without the use of violence. The association of unifying the PCs and mobiles in a short-range wireless link with his Scandinavian region gave the name to what we know as Bluetooth.