The Kirk’s dik-dik antelope (Madoqua kirkii) is a small artiodactyl mammal that lives in eastern and southwestern Africa. You may be wondering where that name comes from, right?

Well, its peculiar name is due to the sounds they make reminiscent of “zik-zik” or “dik-dik” (alarm call). Besides, the movement they make when they feel they are in danger and run in a zigzag pattern, reaching speeds of over 25 miles/h, fleeing from predators such as cheetahs, leopards, and eagles.

Their body coloration varies from yellowish gray to brown, with the belly area being lighter. A very striking feature is their prehensile snout, which they can move in all directions.

Besides, they have a gland near each eye that they use to mark their territory and a tuft of hair on their forehead that they ruffle when agitated. Also, it is considered the second smallest antelope in Africa: it reaches 27 inches in length and 15 inches in height at the most; it weighs can up to 15 pounds when it reaches adulthood. 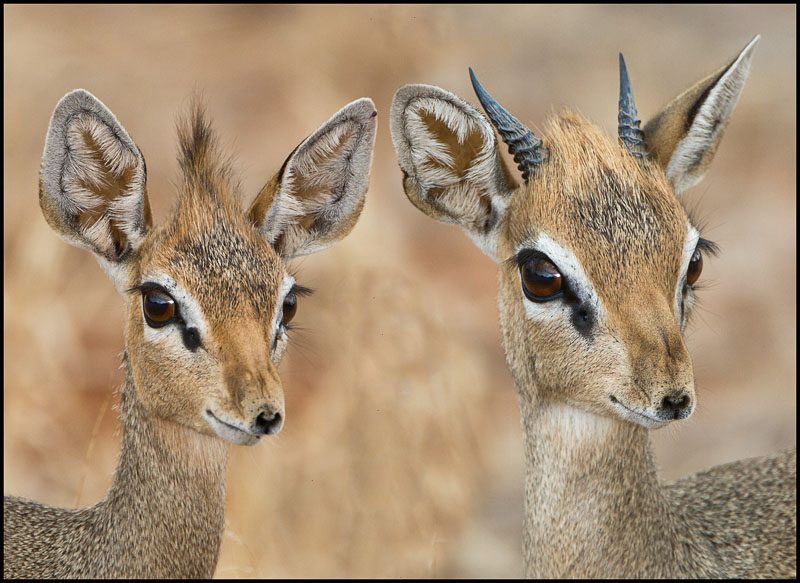 Its habitat includes arid and semi-arid areas with dense and thick bushes spread throughout eastern Africa (Somalia, Kenya, and Tanzania) and southwestern Africa (Namibia and Angola).

It is an antelope accustomed to living in dry terrain, so it does not need much water. Also, it has very territorial habits and lives with a single couple. They leave the group at an early age, approximately when they reach seven months of age.

The dik-dik antelope bases its diet on vegetation, including shrub leaves, bushes, shoots, grasses, and fruits.
It feeds at two times, early in the morning and at dusk, as its metabolic needs are very high despite its small size. Its nature is shy and elusive, and it takes advantage of its size to hide in the bushes.

Contrary to most ruminants, dik-dik calves are born with their front legs bent instead of extended. As far as physical differences are concerned, this species shows sexual dimorphism, with the males having a pair of straight, ringed horns, while the female does not.

On the other hand, as we have said, they are very territorial animals that live in the same area for years. They mark their territory through a process called the defecation ceremony, in which the female and the male participate to delimit their area.

They reach sexual maturity early before they reach one year of age. Gestation lasts 5 to 6 months, so they can reproduce up to 2 times a year, having only one offspring per birth.